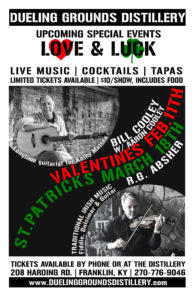 February 11th will feature acoustic guitar virtuoso, Bill Cooley. Bill has toured playing lead guitar for Merle Haggard, Reba McEntire, Alan Jackson and for the last 28 years Kathy Mattea. Guitar Player magazine has called Cooley one of Nashville’s most respected sidemen. He has released 4 albums of solo guitar music. His most recent making the Best of List for 2016 in Premier Guitar Magazine. Andy Ellis wrote: “With impeccable technique, he drapes precisely articulated melodies over inventive bass lines and gorgeous counterpoint….if you’re craving inspiring fingerstyle guitar work, you’ll find it here.” Celine Keating at Minor7th.com calls him “a consummate fingerstyle guitarist….the versatile Cooley is adept at seemingly any style. As a composer and arranger Cooley is every bit as talented, offering strong melodies and thoughtful arrangements that toss up small surprises to keep the ear engaged.” Bill will be joined this evening by his son, Aaron, an exciting new force on guitar in his own right. Aaron has recently moved back to Nashville after fronting his own band in the Denver rock scene. The duo has been working up material to showcase their songs as well as their mutual passion for guitar.

March 18th will feature a return to Dueling Grounds Distillery of R.G. Absher from Taylorsville, NC. Absher was born in West Jefferson, in Ashe County, and has lived in western North Carolina most of his life. R.G. spent time with Al Wood, a banjo player from Alexander County, Fred Weaver, an old-time two-finger banjo player from Alleghany County, and Bill Young, a finger-style guitar picker who also played rockabilly. When R.G. started making trips to the British Isles in the early 1990s, he became fascinated with the traditional music he found there and studied it intensely. “I wanted to give my music the hook of Irish influence,” he says. R.G. is a versatile musician, adept at hammered dulcimer, guitar, banjo, and fiddle. He has produced seven albums and performed extensively in a variety of venues from festivals and stage performances to schools. He has toured Ireland extensively, learning Irish fiddle and ancient Celtic tunes that he then adapted to the hammered dulcimer.