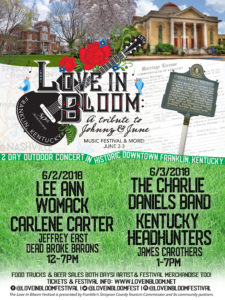 Franklin, Ky. – Fifty years ago Johnny Cash and June Carter won a Grammy Award for a song that begins with the lyrics “We got married in a fever, hotter than a pepper sprout.” The very next day after winning that award the famous couple drove to Franklin, Kentucky and quietly got married in a church on the town square. Now, a half-century later, three more Grammy winners are headed to Franklin, Kentucky to perform at the first Love in Bloom Festival, organized as a tribute to Johnny and June.

On Sunday, June 3rd the Charlie Daniels Band will play on an outdoor stage set up between the county jail and the courthouse, just two blocks from the church where Johnny and June tied the knot.

The Charlie Daniels Band received a Grammy Award in 1979 for “Devil Went Down to Georgia.”

Preceding Charlie Daniels to the stage on Sunday will be the Kentucky Headhunters, winners of a Grammy Award in 1990 for their debut album “Picking on Nashville.”

Lee Ann Womack, winner of a Grammy Award for her collaboration with Willie Nelson in 2003, will take the stage on Saturday, June 2nd. Womack’s biggest hit was “I Hope You Dance” in 2000.

Also slated to perform on Saturday, June 2 is Carlene Carter, daughter of June Carter and her first husband, Carl Smith. Long before she launched her own successful career as a singer, 12-year-old Carlene Carter was at her mother’s side when June married Johnny Cash in Franklin in 1968, one week after accepting his proposal onstage in Ontario, Canada.

Rounding out the festival line-up are James Carothers, Jeffrey East, and the Dead Broke Barons. Carothers and East are young singer-songwriters based in Nashville. East grew up in Franklin. Current Franklin residents Shane Johnson, Seth Pedigo, and Hunter Colson create the “FunkGrass” sound of the Dead Broke Barons. Music at the Love in Bloom Festival is scheduled from 12 to 7 p.m. each day. Tickets go on sale Tuesday, March 20 on the website www.loveinbloom.net.

A Kentucky state historical marker commemorating the Johnny Cash – June Carter wedding will be dedicated on Friday, June 1. Ronnie McDowell will perform at a free concert on the town square that evening, during the Franklin-Simpson Renaissance Summer Nights Concert Series. For more information about the festival, visit the website www.loveinbloom.net or go to loveinbloomfestival on Facebook.